Above: Downtown Fairbanks in the early days. (Photographer unknown)

We reproduce historical classics and also research newer histories such as Cold Missions: the U. S. Army Air Forces and Ladd Field in WWII and A History of Creamer’s Dairy, Fairbanks, Alaska.

Allies in Wartime:  The Alaska-Siberia Airway During World War II

This publication by the Alaska-Siberia Research Center is free for the public. You are welcome to download and share this book here https://www.dropbox.com/s/rrr5khe8a7ta25i/Allies%20in%20Wartime_WEB.pdf?
This book is a collection of articles, essays and speeches that together illuminate
a remarkable chapter in human history—the Alaska-Siberia Airway during World
War II. The distinguished writers found herein include well-known historians,
anthropologists, diplomats, and political leaders representing the United States,
Russia, Great Britain, Canada and France—all among countries allied against
Nazi Germany and its Axis powers during the war. Their inspirational memories
and observations remind us of a time when cooperation and good will among
peace-seeking nations arose victorious over evil.

Through Their Eyes. A Community History of Each, Circle and Central.

The towns of Eagle, Circle, and Central are tucked away in the cold, rugged, and sparsely populated central-eastern interior of Alaska. These communities have fewer than three hundred residents in an area of more than 22,000 square miles. Yet they are closely linked by the Yukon River and by history itself. Through their Eyes is a glimpse into the past and present of these communities, showing how their survival has depended on centuries of cooperation. The towns have roots in the gold rushes but they are also located within the traditional territories of the Hän Hwëch’in, the Gwichyaa Gwich’in, and Denduu Gwich’in Dena (Athabascan) peoples. Over time, residents have woven together new heritages, adopting and practicing each other’s traditions. This book combines oral accounts with archival research to create a rich portrayal of life in rural Alaska villages. Many of the stories come directly from the residents of these communities, giving an inside perspective on the often colorful events that characterize life in Eagle, Circle, and Central.

Roshier H. Creecy. A Black Man’s Search for Freedom and Prosperity in the Koyukuk Gold Fields of Alaska

Born in 1866, Roshier was among the first generation of African Americans who were freed to migrate. Follow his unique journey from his time with the “Buffalo Soldiers” to the Klondike gold fields. In 1906, he mushed his dogs from Dawson to Fairbanks, bound for the Koyukuk gold fields, where he remained the rest of his life. Described as a jokester with a wry sense of humor, Roshier’s journey led him to discover personal growth and a sense of belonging in a wondrous wilderness hinting of gold.

Alaska in the Progressive Age 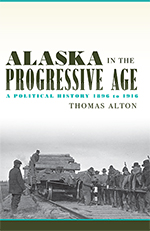 The growth of modern-day Alaska began with the Klondike gold discovery in 1896. Over the course of the next two decades, as prospectors, pioneers, and settlers rushed in, Alaska developed its agricultural and mineral resources, birthed a structure of highway and railroad transportation, and founded the Alaska cities we know today. All this activity occurred alongside the Progressive Age in American politics.

Alaska in the Progressive Age looks at how this national movement affected the Alaska territory. Though the reigning view is that Alaska was neglected and even abused by the federal government, Alton argues that from 1896 to 1916 the territory benefited richly in the age of Progressive Democracy. As the population of Alaska grew, Congress responded to the needs of the nation’s northern possession, giving the territory a delegate to Congress, a locally elected legislature, and ultimately in 1914, the federally funded Alaska Railroad.

This book can be purchased on the University of Alaska Press webpage at https://www.alaska.edu/uapress/browse/detail/index.xml?id=586.

This collection of photographs of Alaska pioneer home interiors, assembled by historian Jane Haigh, is a great resource for those seeking to identify authentic furnishings or styles, or to recreate them for museums, theater sets, or private homes. Price: $16.95, includes shipping & handling.

A reprint of the delightful 1909 cookbook, originally published by the Ladies of the Presbyterian Church, lists recipes with interesting substitutions for ingredients unavailable in the town’s early years. Provides a glimpse into the practical and elegant lives of early Fairbanksans. Price: $13.50, includes shipping & handling.

In this edition (edited and abridged by Terrance Cole) this humorous and upbeat memoir of James Wickersham describes his career as a pioneer judge and later as a congressional representative assigned to a vast, snow-covered district, extending over 300,000 square miles in the undeveloped Alaska Territory. Wickersham’s many adventures include traveling hundreds of miles by dogsled and other conveyances, in all kinds of weather. Price: $39.95, includes shipping & handling,

You can order books two ways. You can complete the order form below and make your purchase securely via PayPal.